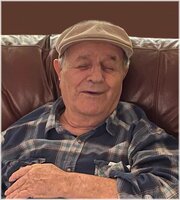 It is with great sadness that we announce the passing John Joseph Saad in the early morning of August 11, 2022 at the Dr. Everett Chalmers Hospital. John was born in Hardine, Lebanon, on May 14, 1932, and moved to Canada on December 10, 1950. John found the love of his life (Edna Vienneau) here in Canada who he was married to for 55 Years, until she passed 6 years ago. He also had two beautiful daughters Joanne Hall and Cathy Saad. John and Edna ran a business together, the Cedar Lunch on York St. in Fredericton, where they ran it together successfully for 33 years until they retired. John loved planting his large garden and putting flowers in (to make Edna happy of course), and always took pride in sharing his vegetables with friends and family. He also took a lot of pride in building his swings and other yard garden boxes, bird houses, tables or what ever else he could come up with, and guaranteed if you stopped in to visit you would end up out in his workshop because he just needed a hand for a minute. Once done in the workshop you would have a short visit, which would almost always end up with a coffee and a game of crib or 45s. For years he also loved to bowl with Edna and the CNIB crew. John was predeceased by his parents Joseph and Meladi (Khoury) Saad; his brothers George, Peter, and Paul Saad; his sister Nalfa Anderson, and his nieces Cathy Saad, and Vicky Anderson. John is survived by his two daughters Joanne Hall (Stewart) and Cathy Saad; his brother Ben Saad; sister Teressa Philips (Saad); 5 grandchildren Ryan and Meagan Hall, George, John and Kaitlyn Saad; 2 great-grandchildren Ava and Joey Saad, as well as numerous nieces and nephews. Visitation will be held at McAdam's Funeral Home on Sunday, August 14, 2022, from 7-9 pm, with Parish Prayer taking place at 8 pm by Msgr. Elie Zouein (Rite of Incense). A Mass of Christian Burial will be held at St. Charbel Maronite Catholic Church, 299 Argyle Street, Fredericton, on Tuesday, August 16, 2022, at 11 am with Msgr. Elie Zouein as celebrant. Interment will follow at the Hermitage Catholic Cemetery. For those unable to attend, please visit the St. Charbel's Facebook page to watch a live stream of this service: https://www.facebook.com/Saint-Charbels-Parish-Fredericton-246319822729921/?ref=page_internal. For those who wish donations may be made to the Canadian Cancer Society or a charity of the donor’s choice.