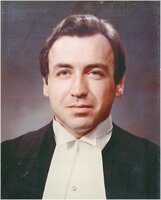 It is with heavy hearts that the family announces the passing of William "Bill" Joseph Connell on Monday, August 15, 2022, at the age of 76 after a period of failing health. Bill grew up in Bartibogue/Newcastle/Miramichi, the son of the late Adelard and Clarissa Connell. Bill completed his BSc at St. Francis Xavier University. He received both his Master of Science degree and his Law degree in 1976 at UNB. He worked in private practice for many years. He was an advisor to the Honorable Frank McKenna from 1984 - 1989. In 1989, he accepted a position as Vice-President at NB Power. One of his many contributions was the negotiation of a settlement with St. Mary's First Nation when they burned some transmission poles in protest over power lines crossing their reserve land. Bill read voraciously and had a keen interest in history, politics and science. He was active in minor hockey and baseball in Fredericton and loved watching his sons play. He had a love of the outdoors and enjoyed the occasional moose or deer hunting trip with friends. In his later years he enjoyed the meetings at the Golden Club as well as his afternoon coffee at Tim's with friends. Bill is survived by his wife of 43 years, Mary, and their two sons, John and Robert (Kimberly); grandaughters, Charlotte and Amelia; brothers, Bob and Paul; sister, Frances; nieces, Lisa, Shauna and Jamie. He will be remembered by his wife and sons for his quiet strength, humility and patience and for his unequivocal support in all their endeavours. He was a constant presence in their lives and will be dearly missed. A special thanks to all the staff at Pine Grove for their exemplary and compassionate care in these trying times. A celebration of life will be announced at a later date. Crowfoot c. 1830-90 Blackfoot chief What is life? It is a flash of a firefly in the night. It is a breath of a buffalo in the winter time. It is as the little shadow that runs across the grass and loses itself in the sunset.