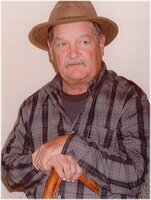 It is with sadness that the family of Ron Hay announce his passing at Saint John Regional Hospital on Sunday, September 25, 2022 at the age of 73. Born in Fredericton, NB, on April 14, 1949, he was the son of the late Carl and June (McLaughlin) Hay. Ron leaves behind his children, Sherry Snow (Gary) of Lincoln, NB, Melanie Hay of Upper Gagetown, NB, Ronnie-Lynn Dunnett (Kevin) of Hanwell, NB, and Terrick Hay (Sammi) of Edmonton, AB; grandchildren, Shane (Kyla), Kelsey, Cody (Ashley), Cory(Alyssa), Amber, Alia, and Tylen; great grandchildren, Olivia and Amelia; as well as several aunts, uncles, cousins, nieces and nephews. In addition to his parents, Carl and June, Ron was predeceased by his brothers, Roger and Reggie; grandson, Ryan; sister-in-law, Ann; son-in-law, Elmer. Ron loved to bowl and in 1997 he was inducted into the City of Fredericton Sports Hall of Fame with the Marysville bowling team, the ally were he was co-owner/manager for many years with his dad, Carl, they were a father and son team. He loved his old cars and every chance he got he would take one of his kids or grandkids for a drive in one of his cars. In Ron’s younger years he enjoyed bow hunting alongside his Nova Scotia Duck Trolling Retriever. He loved animals and they loved him. Ron was a very strong, independent man, and even after the loss of both legs he never slowed down, he kept busy and was always on the go. He will be missed by his family and friends. Visitation will be held at McAdam’s Funeral Home on Sunday, October 2, from 2:00 – 4:00 pm. A graveside service will be held in Sunny Bank Cemetery on Monday, October 3, 2022 at 2:00 pm. In lieu of flowers donations in Ron’s memory may be made to the Fredericton SPCA.