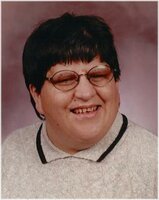 Susan was born on October 27, 1962, at the VPH and was proud of that fact because her mother was also born there. Susan was born with a learning disability but never let that hold her back. She started school in the regular educational program then joined the "School in the "Barn", a free school in Fredericton. From there she attended Bonny Lee Farms, a private school in Nova Scotia for students with special needs, and then finished her education at Fredericton High School. Susan acquired the social skills to live independently for most of her life. She had her own apartment and worked at the Zellers store in the Brookside Mall for over 20 years. Susan attended church regularly and was a long time member of the Wilmot United Church congregation. She volunteered at the soup kitchen and at Wilmot’s Saturday Night Drop-In. She liked to knit, go to Tim’s and to the movies. She was loving, caring, and easily made friends with anyone who took the time to get to know her. Susan received support from Jobs Unlimited and the NBACL. She also had a support network of friends who gathered at her parents for Susan’s annual BBQ. Susan lost her mother to cancer on January 5, 2017, an event so heartbreaking for her that all her hair fell out. She spoke of her mother daily and never forgot the special events in their lives. In the week before her own passing Susan wanted to ensure that there would be flowers in the church to commemorate the passing of her mother, Betty. Susan was a very special person who is survived by her father, Maynard; her sister, Debbie; nephew, Cole; and brother-in-law, Mike. Susan has left such a large hole in the lives of all that got to know her well. A private graveside service will be held in Fredericton Rural Cemetery in the spring. For those who wish, donations in Susan’s memory can be made to the Wilmot United Church Benevolent Fund.