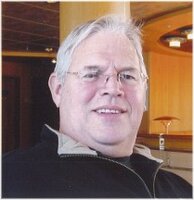 After a short battle with pulmonary fibrosis, Fred passed away peacefully at home on Friday, January 21, 2022, surrounded by his loving family. Fred was born on December 31, 1951, son of the late Barry and Dorothy (Holmes) Brennan. Fred is survived by his wife of 47 years Beth (Flieger) Brennan; sons, Scott (Maggie) of Fredericton, and Barry James of Cochrane, AB; daughter, Jill Cann (John) of Fredericton; grandsons, Logan and Myles Brennan; granddogs, Ruby and Gus; brothers, Jerry (Brenda) of Saint John, NB, Barry Edward (Amy) of Dartmouth, NS, and Mark (Susan) of Bay du Vin, NB; sister, Lois Stewart (Len) of Rothesay, NB; as well as many nieces, nephews, and extended family members. Growing up in Chatham, NB, Fred was very active in his youth, playing hockey, soccer, and track & field. After graduating St. Thomas High School in 1969, he moved to Fredericton to attend St. Thomas University (BA ‘73 and BED ‘75). Fred continued his hockey career with STU Tommies where he was known for his work ethic and speed. Fred spent the vast majority of his teaching career at Albert St. Junior High School and his final year at the new Bliss Carmen Middle School. In the classroom, he was known for being strict but fair and his door was always open for anyone needing help. Fred felt fortunate to work with so many wonderful colleagues over the years and had many fond memories of the laughs they shared. Throughout his life, Fred volunteered countless hours coaching soccer, baseball and basketball. Never one to sit still, Fred could be found skiing, camping or helping friends with "Alumni Construction". No matter the activity Fred was always ready for a good debate, many held during breakfast with his Sunshine Diner crew. His love for sports and activity was expressed in the time shared with his family and friends. An avid football fan, Fred loved his Sunday fun-day watching the New England Patriots with his family. Fred was a strong family man, never missing his children’s games or races. He could be seen on the ball field hitting grounders or in the rink teaching anyone how to skate. Fred’s love and dedication to his wife, sons, daughter, and grandchildren cannot be measured. He will be missed. We are proud of the strength and courage Fred showed during the past year. You will always be in our thoughts and hearts. His Family extends a heartfelt thank you to the Palliative Care Team, Dr. Cameron, Respiratory Therapist Heidi for their care and compassion. A memorial mass will be celebrated from St. Dunstan’s Catholic Church on Friday, June 17, 2022 at 12:05 pm. Masks will be required. For those unable to attend in person a livestream can be found at the following link: www.stmarymagdaleneparish.ca. Burial will follow in Forest Hill Cemetery. For those who wish, donations in Fred’s memory can be made to a charity of the donor’s choice.