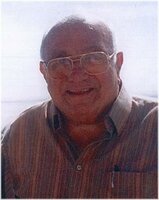 It is with heavy hearts we announce the passing of Louie George. He died on February 17th, 2022 at the Dr. Everett Chalmers Hospital. Born in Fredericton, NB, he was the son of the late George E. and Isabel (Zaher) George and was the loving husband of Roberta George. Louie was a well known business man who owned and operated George’s Clothing and Footwear Store downtown for many years. He was a strong family man, something he learned at an early age. He started running the "store" back in 1950 at the age of 20. He was able to not only keep family together and operate the business but was able to see all his siblings go to college. In his younger years he enjoyed fishing and hunting and playing any sport in the city. He was proud to say "I am the oldest member of the Elks Club!". He was a long-time member of St. Dunstan’s Catholic Church as well. In his earlier years he received the Paul Harris Fellows Award. He was known in the city for his sharp business mind and great sense of humor. He will be sadly missed by his family, friends and many associates. Survived by his loving wife, Roberta; siblings, Anthony "Tony" of Fredericton and Eddie (Katherine) of Houston, TX; furry feline pal, Ricky; as well as many nieces and nephews. He was predeceased by his parents; siblings, Elizabeth, Joey, Helen, Mary, and Elizabeth. There will be no visitation by request. Mass of Christian Burial will be celebrated at St. Dunstan’s Catholic Church on Tuesday, February 22, 2022 at 12:00 pm with Fr. Bill Brennan as celebrant. Proof of double vaccination and government issued identification will be required for entrance to the Mass. For those unable to attend a live stream will be available at the following link: https://vimeo.com/679248975. For those who wish, memorial tributes may be made to charity of the donor’s choice.