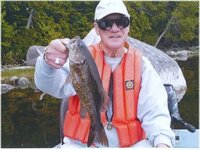 Stanley Verner Wadden passed away peacefully on February 22, 2022, with his family by his side at Hospice House in Fredericton, NB. Stan was the son of the late Harry and Helen Wadden of Glace Bay, NS. Stan is survived by his wife Cathy of 56 years, his daughters Kim and Debbie (Tim Smith), and his pride and joy grandson Dylan O’Byrne. Special mention of the "sister he never had", Wilda. Stan was a proud member of the Royal Canadian Mounted Police for 27 years. He spent his career in the province of New Brunswick with postings in Perth, St. Stephen, Gagetown, Grand Manan, Hillsborough, Saint John and Fredericton. Upon his retirement from the RCMP, Stan accepted a position with the Province of New Brunswick within the Department of Environment. After 10 years with the Province, he retired to spend much of his time woodworking, his true passion. Stan designed and crafted many pieces of furniture for his girls and Cathy. He was particularly proud of one piece, a cradle he designed and built for his grandson. Along with woodworking Stan loved to fish and spend many happy hours with friends at the Hoffman Camp in Charlotte County. Stan is the last surviving member of his immediate family. Besides his parents, Stan is predeceased by his older brother Joseph and sister-in-law Joan, his younger brother Blair, along with several aunts and uncles. Stan was a member of the Roman Catholic Church of Sts. John & Paul in New Maryland, NB. He was there for the ground breaking, and served on the Parish council while it was being constructed. He also served as eucharist minister, greeter, usher, and as a member of the maintenance team at the church. The family would like to thank the Extra Mural nurses, especially Krista. They wish to express their appreciation and heartfelt thanks to the palliative care doctors, nurses and staff at Hospice House for the caring, kindness and compassion shown to Stan and his family. There will be no visitation. A Mass of Christian Burial will be held at Sts. John & Paul Catholic Church on Friday, March 4, 2022, at 12 pm noon, with Fr. Bill Brennan as celebrant. Due to limited seating, a reservation is required to attend the service. We are now at full capacity. For those unable to attend, a recording of the Mass can be watched at https://vimeo.com/684834540. In lieu of flowers, donations in his memory can be made to Hospice House Fredericton, or to the charity of the donor’s choice.