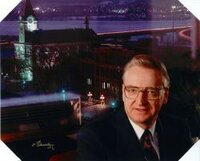 It is with sadness that the family wishes to announce Art’s passing on March 19, 2022 in Ottawa, Ontario. Born October 26, 1924 in Harvey, Albert County, New Brunswick, he was the son of the late Frederick and Mary (Long) O’Connor, and husband of the late Mary (Whalen) O’Connor. Art spent his professional career as an engineer serving the citizens of New Brunswick, starting with the New Brunswick Electric Power Commission’s (NBEPC) upper St. John River hydro electric projects in the 1950s, moving on to become the Chief Engineer and Assistant General Manager of NBEPC and ultimately the President of NB Power. After Art’s retirement he went on to establish and run a consulting service Energy Strategies Ltd. and spent much time renovating and gardening at the family farm in Harvey (Albert Co.) NB. Both during his professional career and after his retirement, Art was involved in many national and international electrical engineering and energy development organizations at executive levels, and travelled worldwide to attend conferences and support those organizations. Art was involved at St. Dunstan’s Parish and with the Fredericton council of the Knights of Columbus. He served as a member of Board of Governors of St. Thomas University. Art was a runner, skier, golfer and maker of skating rinks for his children. He was predeceased by his parents, sisters the Reverend Sister Imelda O’Connor (Sisters of Charity Saint John) and Eva (late Michael) Delaney, and grand-daughter Claire Power. Arthur is survived by his sister Florence (George) Smith and their family; his children: Michael (Anne) and their children Trish, and Brenda and her children Kathleen, Olivia and Noah; Patrick (Deborah Kyte) and their children Megan and Bryce; Timothy (Ellen Barry) and their children Melissa (Tom Howard) and their son Whalen, Ryan (Emma) and their children Violet and Hannah; Shawn (Wendy) and their children Brendan (Alana) and their children Charles and Harvey, Lauren, Colleen (Brandon) and Kelly (Nic); Susan (Rob McCulloch) and their children Baily and Holly; Brian (Rizza Manigbas) and his children Alec, Rhys, Zyra and Liam; Sharon (Patrick Power) and their children Thomas and Monique; Daniel (Leanne Schoenroth) and their children Matthew and Katherine. A Funeral Mass will be held at St. Dunstan’s Catholic Church, Fredericton, on Friday April 1, 2022 at 12:05 pm. In accordance with the church’s policy, attendees must wear masks while in the church. For those unable to attend the service, a livestream will be avaialbe at this link: https://vimeo.com/694855964. In the case of technical difficulties, a recording will be made avaialbe at this link the following day. In lieu of flowers, donations to the Cancer Society, the Association of Professional Engineers and Geoscientists of New Brunswick scholarship fund, or charity of the donor’s choice would be appreciated by the family.