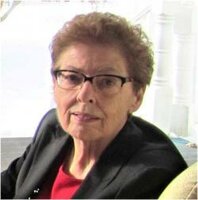 It is with profound sadness that the family of the Honourable Madame Justice Myrna Athey (Hawkes) announces her passing at Hospice House Fredericton NB on May 23rd 2022 in her 77th year. Myrna graduated from Woodstock High School, Provincial Teachers College and UNB with Bachelor of Arts and Law degrees. Following graduation Myrna practiced law with various Fredericton lawyers and law firms including Lawrence Garvey, Dan McCormack, E. J. Mockler Professional Corporation and eventually established her own law practice which later became Athey & Athey when her husband Barry Athey, QC joined the firm. In 1990 she was invested as a Provincial Court Judge in Family Law and served in that capacity for 3 years in Moncton before moving to the Fredericton Court. She became supernumerary in 2008 and fully retired in 2017. As a university student Myrna was a member of the synchronized swim team and the Red Cross Society. She served as President of the NB Law Society and enjoyed curling and playing bridge. For many years she was an active participant in a local Gourmet Club and tempted her family with the skills that she had acquired. In later years Myrna became addicted to needle work which became her passion. She compiled a wonderful and extensive library of periodicals and reference books on this art form, finding immense enjoyment studying and scanning the volumes for inspiration to create personal works. She constantly produced fine works as gifts for family members. She advanced her skills to the point where she created a very complex and detailed cross stitch Sampler ultimately presented to her brother and his wife on their 40th wedding anniversary. Although Myrna created many complex works for her family, she considered the Sampler as her ultimate needle work achievement. She spent many enjoyable and often demanding hours persuing this passion. Myrna is survived by her brother, Ronald J Hawkes (Erma); nieces, Melanie Corey (Trevor); Kimberley Hawkes; grandniece, Brianna Corey, all of Fredericton, grandnephew, Brendan Corey OLY, Melbourne, Australia and many cousins. Myrna was predeceased by her parents, Joseph Hawkes and Emma Hawkes and her husband, Barry. In addition to her family Myrna, appreciated the exceptional support of two lifelong family friends, Linda and Dr. Wolfgang Faig and Jean and Bill Anderson in her difficult recent few months. Myrna and her family appreciated the professional and caring attention she received from staff of the DECH, and Hospice House in these months. There will be no services at this time. Please give consideration to Hospice House should you wish to participate in any memorial for Myrna.