When James A. McAdam opened the doors of one of Fredericton's first funeral homes on Carleton Street in 1899, it seems unlikely that he could have envisioned the business more than a century later, still bearing his name and still demonstrating the values he and three generations of his family would instill in it.

P. Edison Hamilton suspects that, while the original Mr. McAdam might find it quite a different business these days, he would be proud of what his sons and grandson accomplished after he retired. Recently retired as the firm's Managing Director, Ed Hamilton joined McAdam's in 1980 and practiced his trade for several years at the side of Walter McAdam, the founder's grandson who retired in 1989.

After nine decades under his family's management Walter, upon his retirement, chose to entrust the enterprise to Ed Hamilton and the MacMackin family, another southern New Brunswick clan with nearly twenty years and two generations of funeral service behind them. 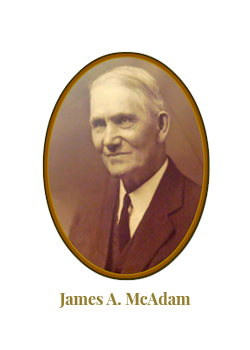 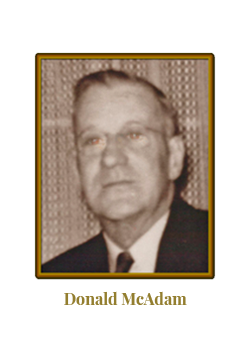 Always located in the downtown area of the New Brunswick capital, McAdam's moved from its original Carleton Street location to 651 King Street but that property was later to be expropriated and rezoned, necessitating the move to its current prominent location in 1961. Formerly the Vanbuskirk family residence, the dignified, columned facade at the corner of York and Brunswick Streets has today become a Fredericton landmark as the community's oldest established funeral home.

In fact, until the 1960's, McAdam's was often the city's only funeral home. Others came and went from time to time but none stayed very long. A Mr. White is thought to have been in the business on Westmorland Street earlier than McAdam's however, he too was only there a short time. It may be that family was McAdam's secret to longevity. James McAdam's sons followed him into the business, Donald around 1920 and Kenneth sometime later after traveling to Boston to train as an embalmer at the J. S. Waterman Funeral Home.

He returned as one of the region's first formally trained practitioners and would eventually pass his skills on to many others, among them his nephew - Donald's son - Walter who entered the profession in the summer of 1945 and spent three years training as an apprentice with his Uncle Ken.

The type of formal training that Ken brought to the business was still in its early days when he took in his first apprentices, a period when the local cabinet-maker or blacksmith often became the community undertaker on the side. This was a logical assignment given that, at the turn of the century in this region, an undertaker's role was primarily as the provider of a casket and a horse drawn hearse. In other words, he required the wood working skills of a cabinet-maker and a good team of horses - a commodity often found in the possession of the blacksmith. The addition of some basics like a casket truck, a bier and candelabra, and you were in business. Ken's father is believed to have started his career in cabinetry, before setting up his funeral home. 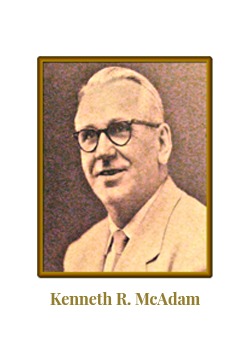 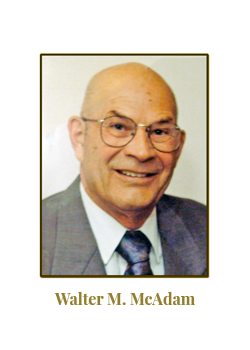 By the 1940's when Walter McAdam joined the firm, his grandfather had retired and the business was being operated by Donald and Kenneth along with John Flanagan and Bill Vaughan. The nature of the business was changing at that point but still quite different from today's funeral home. While the horse drawn hearse had been retired and walking processions were rarely seen anymore, the two viewing rooms at the King Street funeral home still were not very busy. Resting and visitation in the family home were still the norm and preparation work was done there as well with portable equipment. Before the 1950's McAdam's funerals generally began with prayers at the family home and then a procession to the church. Following the service a second procession moved off to the cemetery. In those days it was not unusual to have the interment in a family cemetery on private property. While other family members grew up around the business and then choose other career routes, Walter McAdam decided to continue in the family tradition. He took an increasingly active role in the management of the funeral home through the 1960s and into the 1970s as the elder generation retired.

With Walter over the years were several other prominent names in Fredericton area funeral service; Holden Lingley, Eugene Bubar and John Felsing among others. Joe Doucet, Kirby Burditt, Dave Cook, Brian Bruce and  Dick Fry also came to the company during that period.

Stan Dunnett, a well known member of McAdam's staff for many years, joined Walter at McAdam's in the 1960s, serving hundreds of Fredericton area families before moving away from the area in 1990. When he returned to Fredericton in 1997, his old friend Ed Hamilton welcomed him back to the McAdam's team where he would spend the remainder of his remarkable career. Though formally retired somewhat earlier, Stan continued to play an active role at the funeral home right up until his untimely death in 2012.

As his retirement approached Walter McAdam choose to maintain the family nature of the enterprise, selling the funeral home to the MacMackin family of Saint John in 1989. The late H. Douglas MacMackin had purchased Brenan's Funeral Home in the early 1970s from the Brenan family and established his own family in the business. 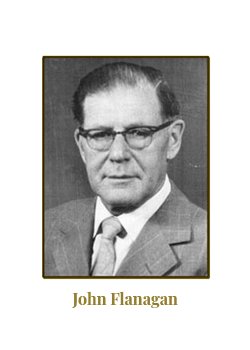 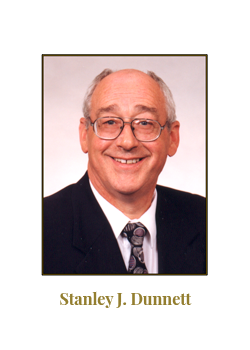 Eldest son Stephen D. MacMackin succeeded his father at Brenan's and William F. (Bill) MacMackin returned to the family firm when the McAdam's business was acquired. Moving to Fredericton, Bill joined Ed Hamilton and the team at McAdam's, accepting the challenge of moving the business forward on the foundation Walter McAdam's family had laid.

Shortly after settling in to his new position Bill MacMackin took on the task of managing a major renovation of McAdam's seventy-year old building. Striving to preserve the tradition and character of the structure while providing the most up-to-date facilities and services available, the project was carried out in the spirit of restoration. The goal was not just to preserve "the look" of the business, but also to respect the history and prominence of the building in downtown Fredericton. The renovation project took in the entire premises and - with plenty of off-hours effort - took place without any interruption of the business. In some areas the structure was literally stripped to the outside walls and rebuilt. Although the building was found to be structurally sound, years of settling and weathering had taken their toll and there was a lot of leveling and squaring to be done.

While Bill busied himself with the facilities, Ed Hamilton was settling in as managing director. A third generation funeral service professional, Ed learned much of the business working with his father, Parker E. Hamilton, in the family funeral home he owned and operated in Prince Edward Island. Parker Hamilton followed his uncle, Joseph Moore, a Perth Andover, NB funeral director into the profession. After growing up around the business and helping his father in PEI, Ed made the decision to build his own career in funeral service and moved to Dartmouth, NS in 1971, where he completed his apprenticeship at Mattatall Funeral Home. He trained and worked with Harold Mattatall and Doug Totten in Nova Scotia for several years before his move to Fredericton.

Having entered the 1990's newly refurbished McAdam's continued to be a leader in services and standards. An in-house crematorium and professional pre-need program were added by the time the business celebrated its centennial. The firm also became a founding member of the Select Network of Community Funeral Homes - a group of independent funeral service providers dedicated to preserving the family funeral home while providing its members with access to systems and a support structure not typically available to small businesses. 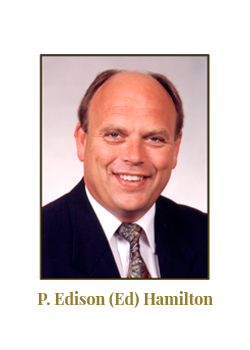 A long-time shareholder in the business, in 2006 Ed Hamilton would accept the opportunity to attain one more career milestone, becoming a full partner in the business and the President of McAdam's and Oromocto Funeral Homes. Having surpassed 40 years in the profession, early in 2012 Ed Hamilton made the decision to retire and sold his interest in the firm to his Assistant Managing Director Andrew Perry.

A Fredericton native, with more than twenty years experience in funeral service, Andrew has spent his entire career in the Fredericton area - the greatest part of it at McAdam's. The son of the Reverend Joyce and Sel Perry, Andrew is well known in the community and looking forward to many more years of service to friends and neighbours as he settles into the role of President and Managing Director. "Those of us fortunate enough to work here at McAdam's have an extraordinary legacy handed down to us by some of our profession's finest practitioners." says Andrew. "Living up to their standards is a real challenge but one that we're very committed to meeting every day."