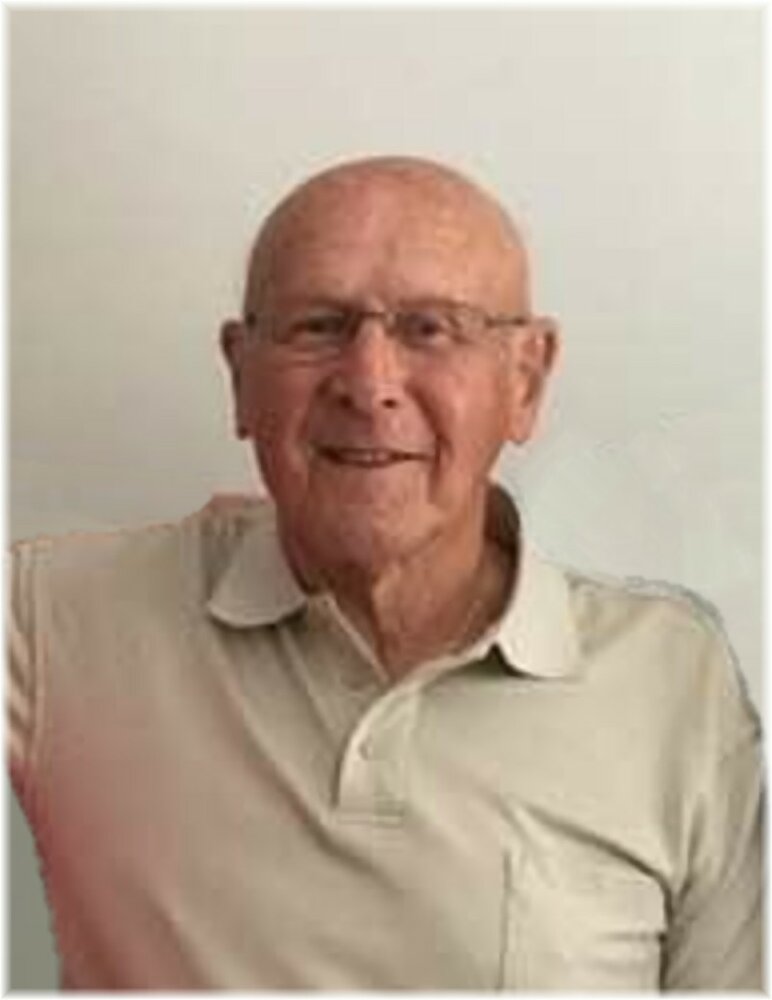 Link to the Recording of the Funeral Mass

After a short period of failing health, Ernest (Ernie) Holton passed away peacefully at the Dr. Everett Chalmers Hospital in Fredericton, New Brunswick, on 4 October 2022, with his wife Patricia and other family members by his side. He was 91 years old.

Ernie was born to John Holton and Sophie (Pastuck) Holton near Oxford, Cumberland County, Nova Scotia, on 30 April 1931. Shortly afterward, the family moved to Cape Breton Island and Ernie was raised in Scotchtown. To say he was extremely proud of his Cape Breton roots would be an understatement.

Ernie loved and was loved by his family. He is survived by his loving wife of 55 years, Patricia, of New Maryland, and his children, Rick (Colleen) of Oromocto, Greg of Cambridge, ON, Sue of Dartmouth, NS, and Bill (Jennifer) of Bayfield, ON. Ernie was also extremely proud of his grandchildren, Jenny, Doug (Ashley), Alex, Patty, Scott, Ben, Aiden, and Jake, and very recently, greatgrandchildren, Anna and Allie. He is survived by his loving sister, Ardis Teague (Jim), Caldwell, ID. Although Ernie was fortunate to have numerous nephews, nieces, great-nieces and great-nephews, he had a very special place in his heart for nieces, Betty Rushton (Albert), Amherst, NS, and Renee Ling (Brian), Pilot Butte, SK. Finally, but by no means least, a person who is not related to the Holton family by blood but couldn’t be loved any more by the entire family if she were, Marilyn Arseneau.

Besides Ernie’s parents, Ernie was predeceased by his first wife, Margaret (DeWitt) of McAdam, NB, brothers, Steve and George, sisters, Elizabeth and Mary, and his niece, Norma (Kit) Kitney.

Ernie graduated from Ottawa University in 1954, receiving a Bachelor of Science in Physical Education in 1954, one of the first ever presented by that institution. From there, he went on to a career in education in New Brunswick. He was a Phys Ed teacher in Campbellton, NB (’53-’59) and Woodstock, NB (’59-’62). Returning to Campbellton in 1962, Ernie moved into the classroom at Campbellton High School teaching Mathematics, Sciences and Health. In 1967, Ernie was appointed the Principal of the Lord Beaverbrook Elementary School, a position he held until his retirement in 1988.

Ernie was an exceptional athlete, coach and mentor throughout his life. He was well known as a high school coach of basketball, volleyball, and track both in Woodstock and Campbellton in his early career, coaching both boys’ and girls’ teams. A talented fastball player, Ernie was a fixture of the very competitive Campbellton Fastball Leagues of the 60s and early 70s at the old Riverside Park, backstopping and player-coaching teams to numerous league titles. Notable achievements were winning the Home Run and RBI crowns of the Riverside Park League in 1965 and was the player-coach of numerous league championship teams. As player-coach of the 1972 Campbellton All-Star team, he captained this team to the Maritime Intermediate B Championship. When his playing days were done, Ernie coached the Campbellton Ladies Team to a Provincial Intermediate B Championship in 1974.

Notwithstanding his fastball talents, Ernie’s passion was basketball. During his life, he was coach and mentor to high school teams in Woodstock and Campbellton, and especially as an official. Ernie attended numerous provincial championship high school tournaments throughout the province, attended almost every Atlantic/National intercollegiate tournament held in Halifax since the 1980s, and since his move to New Maryland, he was a UNB Reds season ticket holder. Ernie was recognised both provincially and nationally for his contribution to basketball in NB. In 1983, he was presented with a Basketball New Brunswick Award for “outstanding service to basketball in NB”. In 1996, Ernie was awarded the J.A. Willox Award of Merit by the Canadian Association of Basketball Officials in recognition of his “outstanding contribution made to basketball and basketball officiating”. Ernie had the notable achievement of officiating high school basketball in six consecutive decades from 1950s- 2000s.

The family would like to extend its very sincere thanks to the doctors and nurses of the Dr Everett Chalmers Hospital, especially the nurses and staff of 4NW, for their care and compassion during Ernie’s hospital stay. A special thank you is extended to Pam, LPN, whose dedication and professionalism went above and beyond the standard expected in Ernie’s care and for her compassion to the family during Ernie’s final days.

Ernie’s family will receive visitors at McAdam’s Funeral Home, 160 York Street, Fredericton from 2-4 PM and 7-8 PM, on Sunday, 9 October. A Mass of Christian Burial will be celebrated at Sts. John and Paul Roman Catholic Church, 727 New Maryland Highway, New Maryland, on Monday, 10 October at 12 PM noon. Interment will be at the Rockland Cemetery, McAdam, NB, at 4 PM. For those who were unable to attend, a recording of the Funeral Mass is available to watch at the following link, https://vimeo.com/758488253 .

In lieu of flowers, donations to the Kidney Foundation of Canada, or the charity of your choice, would be appreciated.

Share Your Memory of
Ernie
Upload Your Memory View All Memories
Be the first to upload a memory!
Share A Memory