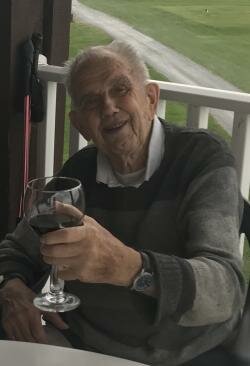 On Thursday, May 19, 2022 Wouter Johannes (Jack) Oudemans, husband and father of three children, six grandchildren and seven great grandchildren, passed away at the age of 99. He was predeceased by his wife Nel and son Michiel (Katharine Locke).

Wouter was born on February 4th, 1923 in a small village in the province of Gelderland in The Netherlands. He survived the second world war as a Dutch citizen and helped host many refugees throughout the war. He met his future wife during this difficult time, and they created some incredible stories during their courtship. They were married on May 22, 1947, and within one month had boarded the ship called the Waterman and were headed for a new beginning in Fredericton, NB. They were sponsored here by Fred Visbach and Osmond Kelly and began their journey in this new world.

Wouter worked for a few years with Odell Lumber, building houses in Sunshine Gardens before enrolling in the University of New Brunswick Engineering program. He graduated in 1959 and secured a job with Atlas Construction in Saint John. He returned to UNB in 1961 and graduated with his masters in April 1964 specializing in concrete construction under the guidance of Prof. A.Y.Y. Ho. He then worked for the Province of New Brunswick for the next 25 years as a bridge designer with projects around the province. He also served on the Metrication Board and the development of standards for Prestressed Concrete design.

After retiring as a civil servant, he worked for a few years with Neill and Gunter as an engineer. He maintained his connection with Holland and the estate of his ancestors called Schovenhorst and travelled there often. In Canada, his hobbies centered around woodworking and photography and served him for over 34 years of retirement working with family and a variety of organizations. This included many years with the Boy Scouts of Canada and the rebuilding of the Yoho Lake Lodge. His retirement was defined by a never-ending series of projects where he was constantly building and creating. His friend and colleague Joe Fowler was his right hand and together they built and maintained projects well into his 90s. His friend Mwafulirwa Ndawona (aka Dennis) enriched his life and gave him the confidence to live independently. A trademark of Wouter was his engaging hospitality and as any of his friends and family can attest to it was always a pleasure to visit. He was well known among the morning walkers at the Grant Harvey Center. When asked where he got his energy from he replied "it is not where it comes from but how to get rid of it!".

He is missed dearly by all his family whom he loved and was very proud of.

A celebration of Wouter's life will be held on Saturday, November 12, 2022 at 2:00 pm at Wilmot United Church. In lieu of flowers, contributons toward the commemorative bench in Wouter's name would be appreciated.

Share Your Memory of
Wouter
Upload Your Memory View All Memories
Be the first to upload a memory!
Share A Memory